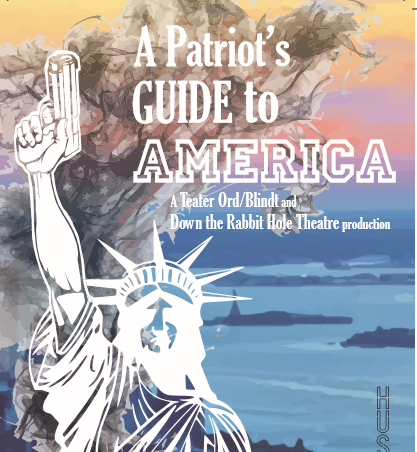 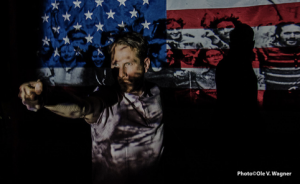 “From impassioned poetry reading to singing and sword-fighting Civil War re-enactments, ‘A Patriot’s Guide to America’ highlights many juicy and contested elements in American history. Stabs are made across the board on topics ranging from race, colonisation and cultural appropriation, to disagreeing histories and biased narratives.

Colour-blindness oozes from a theatrical display of a ’60s America and, sadly, today’s world. Numerous jabs are made at problematic and present-day supremacist remarks as well as an ultimate unwillingness to wrestle with reality.This production, put on by director Jeremy Thomas-Poulsen, raises audience hairs in its breadth of sadistically staged humour. Cued lights and designated props…The band’s exquisitely jazzy soul performance offer an irrevocable asset to the show. ” (Cph Post 2017)
Cph Post gives A Patriot’s Guide to America ★★★★ (4 stars) Nov 2017

All the performers and the director originate from the United States but have at some point decided to move to Denmark. They each have a special reason for living in a foreign country and very different interpretations of the American Dream and what it means to them.

Developed from America’s founding documents along with poetry and other important works that formed the United States of America, this production will mix history, music and poetry with physical theatre.

Producer: Down the Rabbit Hole Theatre