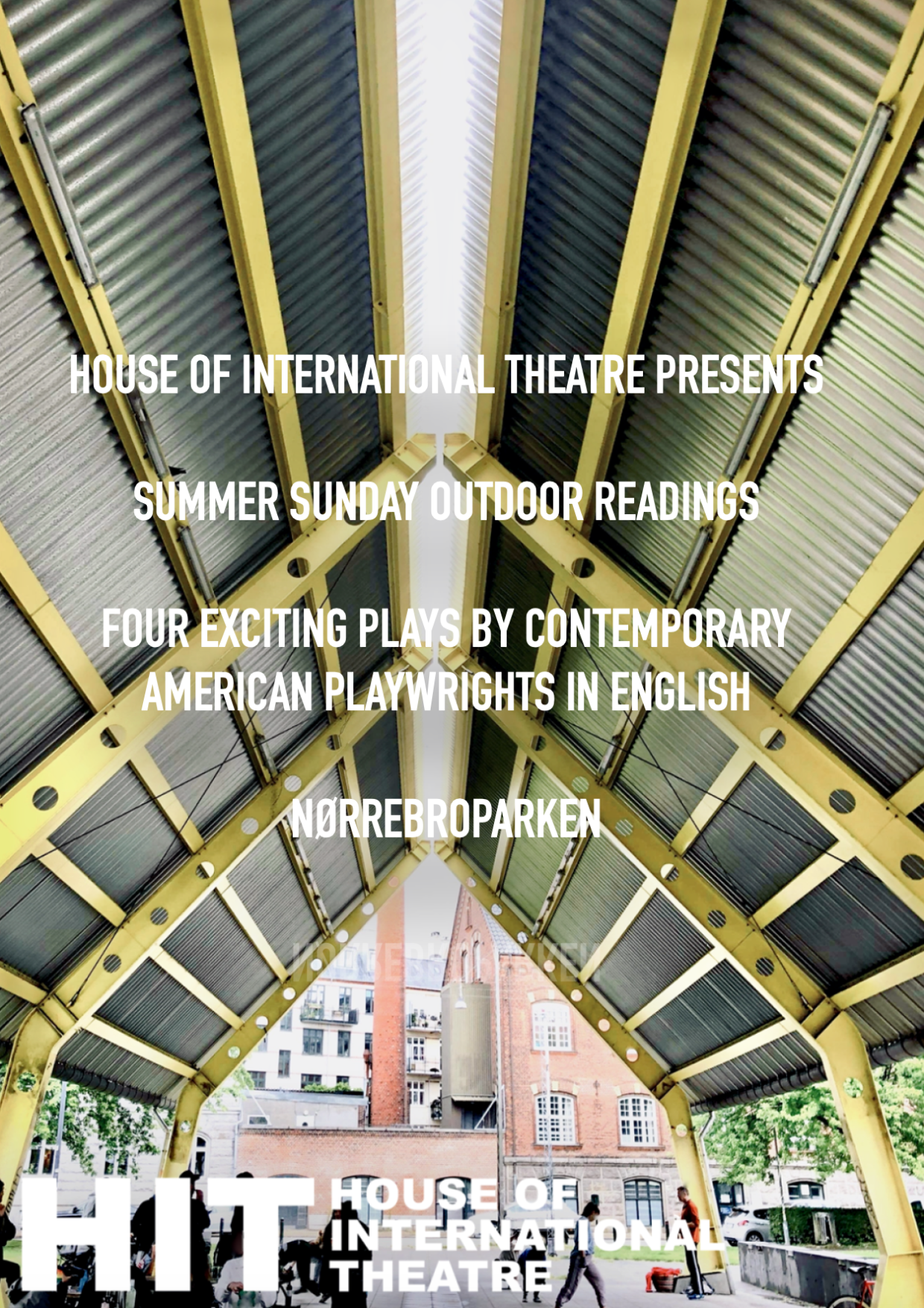 Missing the theatre?
So are we!

Four plays with very different themes and settings, but all of them very much about women and relationships – between sisters, friends, lovers, family and more…

No need to book. But do come on time. Bring your favourite lawn-chair or a comfy blanket and make yourself comfortable!

(METRO: Nuuks Plads. The large yellow and gray concrete pavillion is in the section of Nørrebroparken called Hørsholmparken on the corner with Nivågade. Closest to Jagtvej.)

In case of rain there is an indoor alternative available on the day.

The readings are free for all, but donations are very much appreciated.

These four plays are being performed once only, with the permission of the playwrights.

An ironic yet telling tale of Victorian drama, where a dastardly Jack the Ripper-style killer is roaming the streets of London, targeting actresses not unlike our three heroines. The police don’t seem to be able to crack this series of ghastly murders but won’t accept help in solving the case, from three merely female detectives armed with fans and bustles. Amid the suspense over who done it are timely insights reminiscent of the #MeToo movement. We know that these delightful female Victorian sleuths plus one  American gal – will prevail. And therein lies the fun.

About the playwright: American playwright Patricia Milton’s plays have been performed in New York, Boston, Istanbul, San Francisco and elsewhere, with more than one hundred productions and readings of her short plays internationally. She is currently Resident Playwright at Central Works, Berkeley, California. Her work is characterised by laughter, candour, artistic excellence, determination, integrity, generosity, and feminism.

Abigail is a twenty-something with a severe anxiety disorder and a job writing erotica, who doesn’t get out much. What starts as a few drinks at a local bar turns into a real life trapped room puzzle that Abigail and her wayward little sister Annie, must complete against their will, in order for Annie to keep her job and prove to her family and herself that she can be a responsible adult. Caught in the crossfire is a gay black woman from the North side of Chicago with anxieties of her own.

2nd of August: The Revolutionists by Lauren Gunderson

A brutal comedic quartet about four very real women who lived boldly in France during the French Revolution’s Reign of Terror (1793-1794). Playwright Olympe De Gouge, assassin Charlotte Corday, and former queen (and fan of ribbons) Marie Antoinette, and Haitian rebel Marianne Angelle hang out, murder Marat, lose their heads, and try to beat back the extremist insanity in revolutionary Paris. This grand and dream-tweaked comedy is about violence and legacy, feminism and terrorism, art and how we actually go about changing the world.

About the playwright: Lauren M. Gunderson is one of the most produced playwrights in America, winner of the Lanford Wilson Award, the Steinberg/ATCA New Play Award and the Otis Guernsey New Voices Award, among others, and  holds a 3-Year Residency with Marin Theatre Company. Her work has been commissioned, produced and developed at theatre companies across the US. She writes plays that “give women voice and put their struggles, passions, power and wit, centre stage”.

Anna will do anything to make her sister Lily happy, including destroying all her relationships. When Lily, Anna and her husband Malcolm retreat to their late father’s cabin in Cape Cod, they expect to relax, unwind and take stock. But when a charming but shadowy drifter enters the picture angling for Lily’s heart, their pilgrimage takes a surprising turn. “SISTER PLAY is why live theatre can be so remarkable. You don’t soon forget a play like this.”

About the playwright: John Kolvenbach is an American playwright whose plays have been performed all over the world, on the West End (his play Love Song was nominated for a Olivier Award as best new comedy) and include productions in Rome, Sydney, Wellington, Seoul, Melbourne, Tel Aviv, Zurich, San Juan, Berlin and in many theatres in the US. His play On an average day featured actor Woody Harrelson.