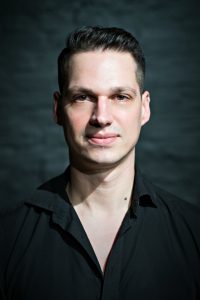 Jeremy is a professional stage director, orginally from America, but living and working in Copenhagen, Denmark. He has a Master of Fine Arts Degree from the University of Wisconsin-Madison (2008-11) and a Bachelor of Directing from Avila University-Kansas City (2000-04). Over the past 16 years, he has developed over 30 productions in the US and Denmark.

He is Artistic Director of Down the Rabbit Hole Theatre, where he recently directed Venus in Fur (2017), Sex and Betrayal (2016) and Elsie and Norm’s ‘Macbeth’ (2016). He is also Co-artistic Director of Teater Ord/Blindt, where he recently directed Drømmens Faner (Københavns Musikteater, 2016). Other notable productions include The Dining Room and Pygmalion (Copenhagen Theatre Circle, 2014 og 2015), POP! (Black Box Pangea, 2014) and Secrets (Why Not Theatre 2015). In 2015, he received a stipend grant from the Danish Ministry of Culture for continued work in combining the genres of spoken word and theatre and the Copenhagen Post named him #1 English-language Trailblazer 2015.